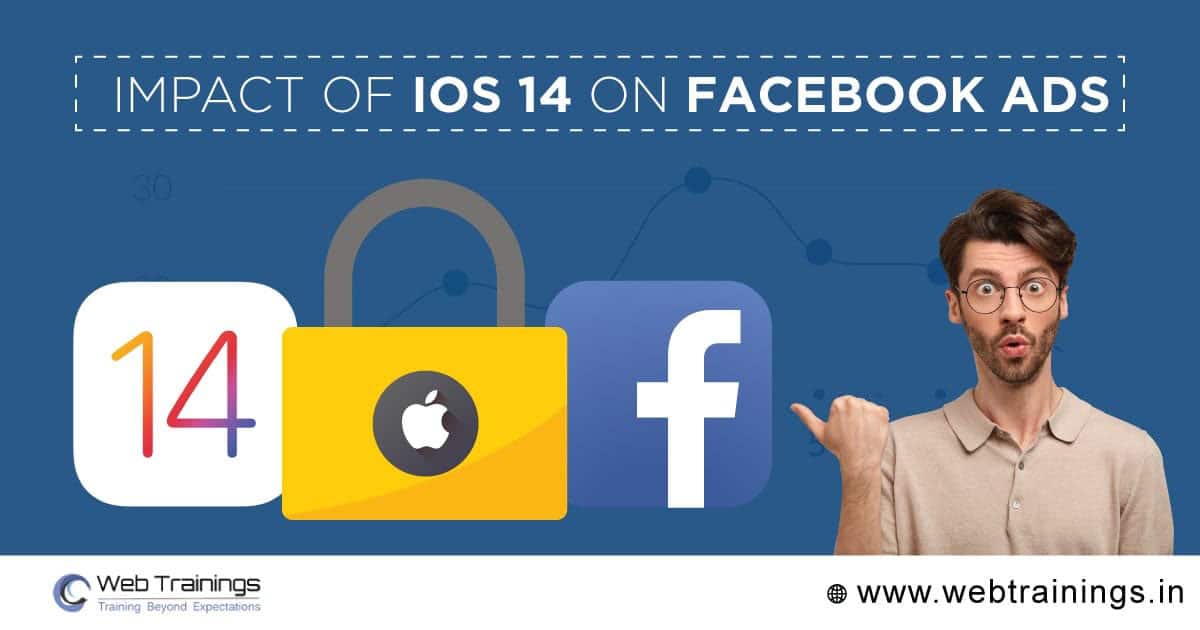 The impact of iOS 14 on Facebook Ads and other advertising platforms can be disrupting for advertisers. With the release of Apple’s iOS 14.5, a new feature has been introduced to give users more control and privacy protection around data collection by third-party applications. While the controls were previously available, but users had to manually check for them. With this update, Apple users will be prompted by their device to opt into or not tracking on iOS 14.5 via this prompt about data collection for each application they use. If permission is denied, applications will not be able to track site and app behavior through their pixels.

This will have an impact on social media platforms like Facebook, Snapchat, TikTok, Pinterest, and other third-party applications including ad-tech applications. But the worst-hit platform will be Facebook.  As more people tend to opt out of tracking on iOS 14.5 devices ads personalization and performance reporting will be limited for both app and web conversion events. In response to these changes, Facebook will start processing pixel conversion events from iOS 14.5 by making changes to pixel implementation and event tracking in order to minimize the amount of data that will be lost. This is referred to as ‘Aggregated Event Management’ and it will affect all advertisers who use Facebook.

Why has Apple released this update?

This update is built on Apple’s consistent approach of reducing automated tracking and prioritizing privacy & data protection. In September 2017, Apple made changes to its Safari browser to reduce tracking of third-party application cookies and other website data through ‘Intelligent Tracking Prevention’ using artificial intelligence. Apple believes to provide its users with options and more control over data that is being tracked with the App Tracking Transparency Framework in iOS. 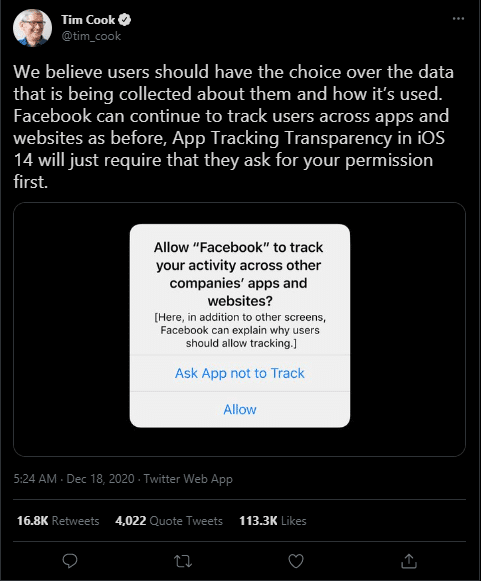 Why is Apple’s iOS 14 update a problem for Facebook Ads?

The impact of iOS 14 on Facebook ads can disrupt Facebook audience targeting, pixel, and conversion tracking. This latest update of Apple’s iOS 14.5 includes a new prompt and information format for any application. Its focus is to make users aware of what an app will track before they install it. 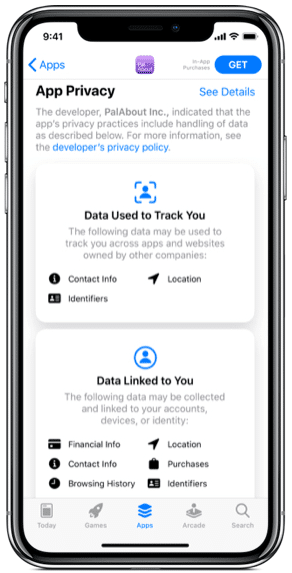 And then a prompt opt-in for the tracking upon installation. 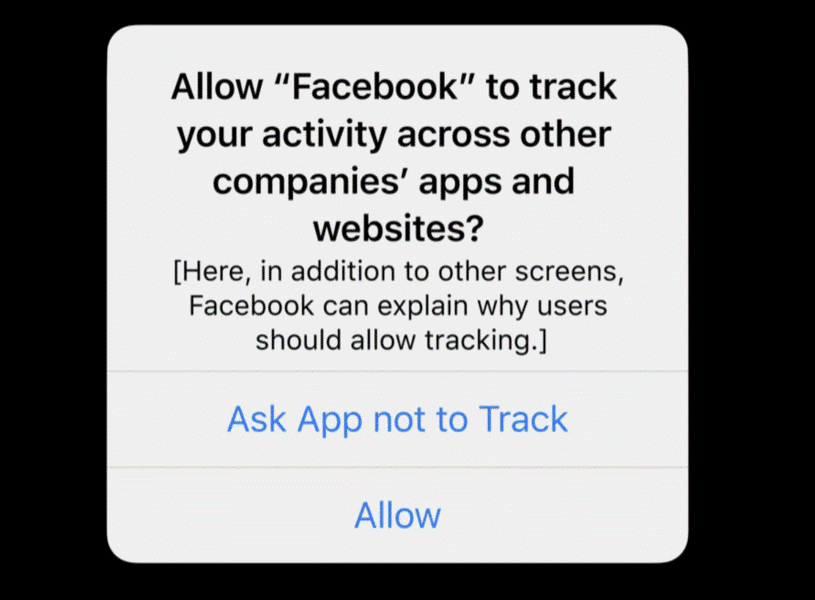 Apple has named it “Apple’s App Tracking Transparency (ATT)” prompt, and it will have an impact on Facebook ads delivery and tracking, attribution settings, custom conversions, custom audiences, lookalikes, and dynamic product ads.

This update will affect all advertisers across Facebook, regardless of whether the audience is using Apple, Android, or Windows operating system to access Facebook on both app and web.

Only eight conversion events can be configured with each pixel per domain in Events Manager. Attribution window periods are also reduced from 28 days to 7 days, which may lead to fewer conversions and less data to optimize.

How is Facebook changing the approach from their side?

To minimize and overcome the impact of the data loss, Facebook introduced “Aggregated Event Measurement.”

Facebook advertisers can only track up to 8 conversion events per domain. This could be 8 custom conversions or 8 pixel-based events. This change will take place automatically, so no changes need to be made. When it comes to reporting, the 8 conversion events will be ranked based on priority accordingly.

You might be wondering what does this exactly means.

Let’s assume you have two of those eight events: Add to Cart and Purchase. Only the Purchase event will be reported as the “higher priority” metric if a user performs both activities. In Events Manager, you’ll be able to specify which of the eight conversion events should be tracked.

Once Aggregated Event Measurement is configured, ads optimization and tracking will work for all users, even for people who opted-out on Apple iOS 14.5 devices.

As mentioned earlier only one of the 8 conversion events can be configured and used under Aggregated Event Measurement.

Update to Facebook’s SDK for iOS version 8.1 to deliver ads optimized for conversion events in your app.

To deliver ads optimized for conversion events on your website:

If you plan to deliver ads optimized for both web and app conversion events, take all the above actions for optimized Facebook tracking and ad delivery.

The following window periods will be supported under the new attribution setting: 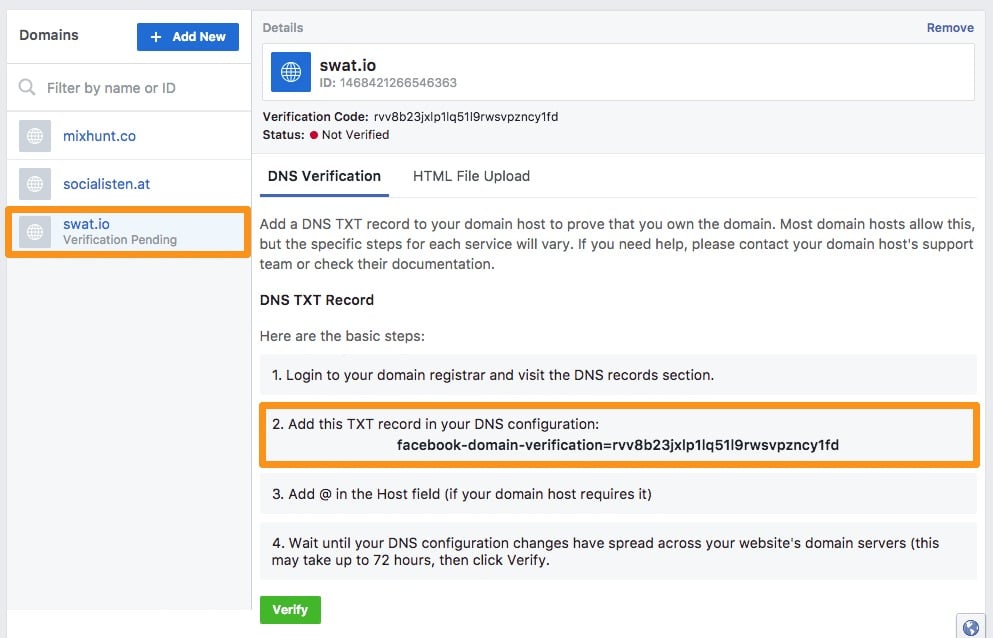 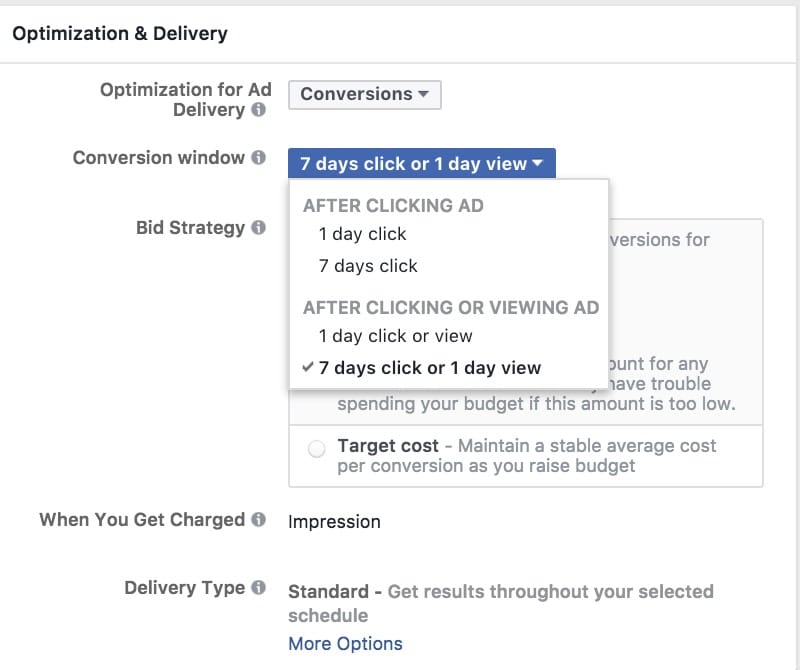 Once iOS 14 changes are enforced, the view-through window period will not be available. Only conversions after clicks will be reported. The new default attribution window will be 7 days after a click.

Previously default window periods were 28 days for clicks and 7 days for views.

It means that if someone clicked on an ad and performed an action in the next 28 days, it was considered a conversion.

If someone just saw the ad without clicking and performed an action in the next 7 days, it was considered a conversion.

However, the new default attribution window will make measurement difficult to analyze as it will contribute to under-reporting on organic and paid posts. You can also expect an increase in Facebook dark post traffic.

A Facebook dark post, or ‘Unpublished Page,’ is an ad that isn’t published on the advertiser’s Business Page or News feed immediately, but rather, shows up on the feeds of targeted customers. You can create such ads in Ad Manager, and choose when and how to post them.

The impact of iOS 14 on Facebook ads can result in ad creation, reporting, targeting, dynamic ad, and other limitations.

Existing ad accounts can be used to advertise to iOS 14 users, but separate iOS 14 app install campaigns should be created to overcome reporting limitations from Apple’s SKAdNetwork API.

Real-time reporting will not be supported and data may be delayed up to three days that comes from iOS 14.5 users due to Apple’s PCM (Private Click Measurement) protocol.

With Apple’s new policy, businesses will not be able to measure the performance of iOS 14 app install campaigns on Facebook.

For iOS 14 app install campaigns, reporting you can rely on data that comes from Apple’s SKAdNetwork API for mobile app installs and other app conversion events.

Similar limitations can apply to the measurement of web conversions due to reporting limitations of Apple iOS 14 devices. The following limitations are expected across Ads Manager, ads reporting, and also the Ads Insights API.

You can also implement Conversions API to ensure that the events are passed back to Facebook directly from the server – not just from the Facebook pixel.

As more people tend to opt out of tracking on iOS 14 devices, the size of your app connections, app activity custom audiences, and website custom audiences may decrease.

As more devices update to iOS 14, your retargeting audiences also may decrease.

Remember that this affects only iOS 14 users, and the rate of opt-outs is not yet known. Facebook Ads conversion tracking and delivery optimization will still work for iOS 14 opted-out users with new attribution window settings. You have to analyze your own data and results carefully to better understand the impact. It’s better to build your own first-party data lists to avoid losing your potential customers.

Although Apple portrays this change as a consumer-focused privacy-first policy, we can’t help but wonder if there’s a hidden agenda that benefits Apple, whether it’s to improve customer loyalty or to improve Apple’s bargaining position and power dynamics against one of its biggest tech rival Facebook.

Recent press coverage plays into Apple’s hands, positioning the company as one that prioritizes privacy. Who knows it could be seen as another step toward Apple developing its own search engine, in addition to the favorable press coverage. Marketers would value Apple’s first-party data more, particularly if it isn’t available on other platforms.

Sadiya Afshan
Sadiya Afshan is a graduate with a degree in Bachelor of Technology, specializing in Computer Science and Engineering. A computer science, web applications, and digital marketing enthusiast, keen to explore, learn and grow in the field of Digital Marketing.
Related Articles 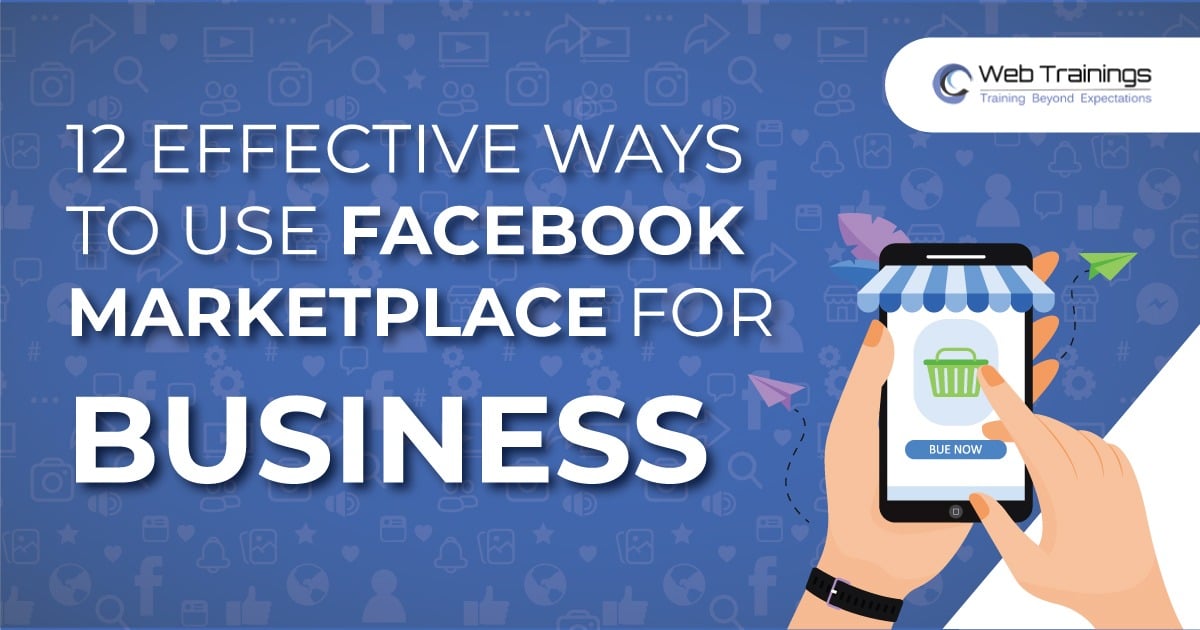 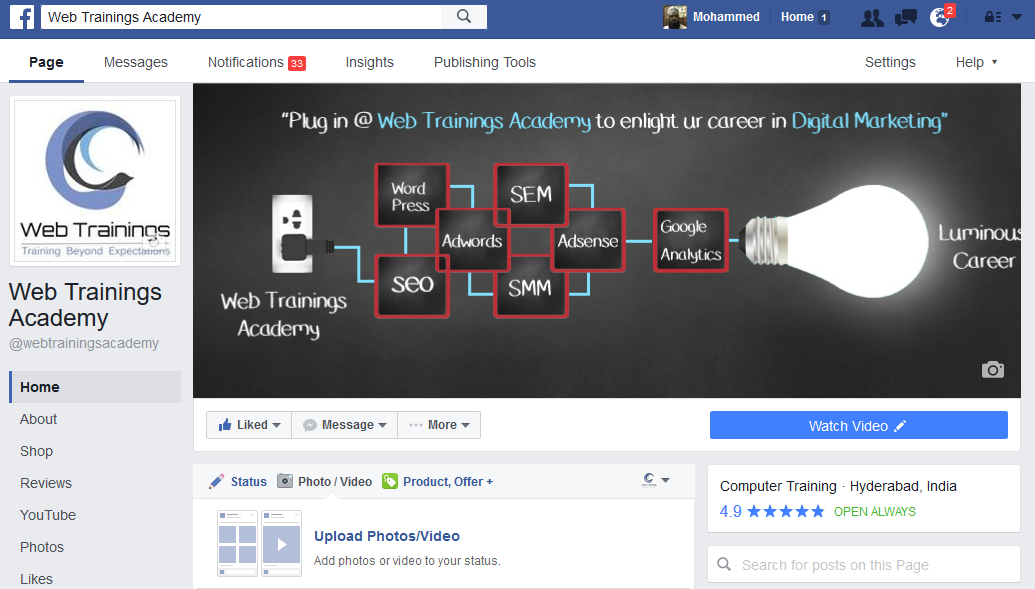